District Officer Roswell and civilian analyst Naima are pulled into an unraveling mystery, that all starts with a simple suspicious activity call. Veils is a lesbian law enforcement story, currently planned to have no primary focus on romance.

I made the cover, with the usage of an image that was available through creative commons rights at www.unsplash.com. The photographer is Jeffrey Swanson.

This is a temporary cover to be used as a placeholder for now, until the book is at the point of self-publishing or submitting to a publisher. At that point, it will get an official cover made, most likely by a professional. 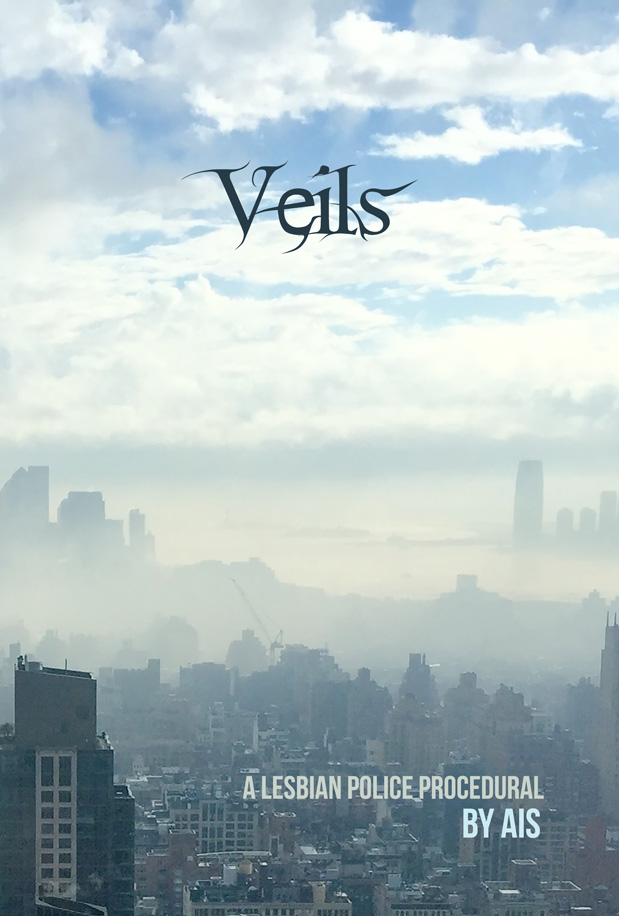 Below you will find excerpts from Veils (working title; it was previously called The Place That Time Forgot). Note that these excerpts are not edited and are included merely to give an idea of the story.

***FURTHER NOTE*** I removed the excerpts that were here previously, as I’ve completely changed the plot for this book and they were no longer accurate or related. Instead, I’m including the full summary which was too long for earlier.

It was a normal day for Roswell, following up on a suspicious activity call for narcotics. When she arrived, she couldn’t find any evidence of narcotics, but something about the woman she met stuck with her even after she left. To the point that she wrote a report despite her sergeant telling her it wasn’t necessary; that there wasn’t a crime, and there wasn’t a report to make.

As an analyst for intel, Naima had a history of finding the one piece of information that unraveled a much larger story. It was mostly an accident that led to her stumbling upon Roswell’s report, but once she did she couldn’t get it out of her head. She had to find out the full story behind that house, that woman; and to do that, she had to start with the cop who had noticed those details, and taken the time to write them down when few others would have done the same.

The woman and that house had a much larger story to tell than even the neighbors knew, and only Roswell and Naima were there to listen. But even once they started to learn the true story, could they help when everything was pushing them away?

A lesbian law enforcement story, currently planned to have no focus on romance.

A message popped up on her screen and she checked it automatically. It was a direct message from the precinct desk.

Ros … what is smarter than a talking bird?

Oh good God. Morrison had gotten into the Laffy Taffy again. Roswell turned left onto the next street and typed back one-handed.

Roswell was horrified to hear herself choke out a short laugh at that. As if Morrison knew, a message came quickly:

You laughed didn’t you don’t lie

Roswell snorted. No way in hell she’d ever let Morrison know. She typed a joke from memory instead:

what did one eye say to the other?

between you and me something smells

Shaking her head to herself, and glad no one was there to see her grin, she looked fully at the road. The few times she’d had a ride along, the civilians had seemed surprised by the level of multitasking officers did on a daily basis; capable of listening to the radio in the background for important information, checking the computer for 911 call notes, typing database searches or notes with one hand, driving, while also watching the surrounding area for suspicious activity.

Today, she listened as the channel covered half the city’s precincts. The calls were mostly property crimes; thefts, shoplifting, and some burglary reports, with vics discovering the garage burglaries when they got up that morning and not calling until they were at work and settled in. There was a robbery or two and a few mental health calls in other precincts.

The other channels covered the higher crime precincts, where the heavier air traffic required fewer precincts to a channel so as not to confuse or overrun the information. As long as there wasn’t a help call, everyone continued on their way. She hoped to never have to hear that bone-chilling alarm tone for the rest of her career, but she knew she would.

It would happen again. It always happened again.

All she could truly hope was that next time it wouldn’t be her partner again. Morrison, down on the ground with a perp struggling for her gun. Trying to kill her.