They had once said that the tree was magic; that under the right circumstances if you stood in its shadow you would never be seen again. But those rumors faded as time passed. Kacie didn’t know about those rumors. All she knew was something felt wrong, and she didn’t know why.

I made the cover, with the usage of images that were available through creative commons rights. I edited both images to some extent, primarily by adding effects or layers on Photoshop. Most notably, in the second linked image below I chose one tree and erased the others, and combined a little of the extra foliage from nearby trees.

This is a temporary cover to be used as a placeholder for now, until the book is at the point of self-publishing or submitting to a publisher. At that point, it will get an official cover made, most likely, by a professional. 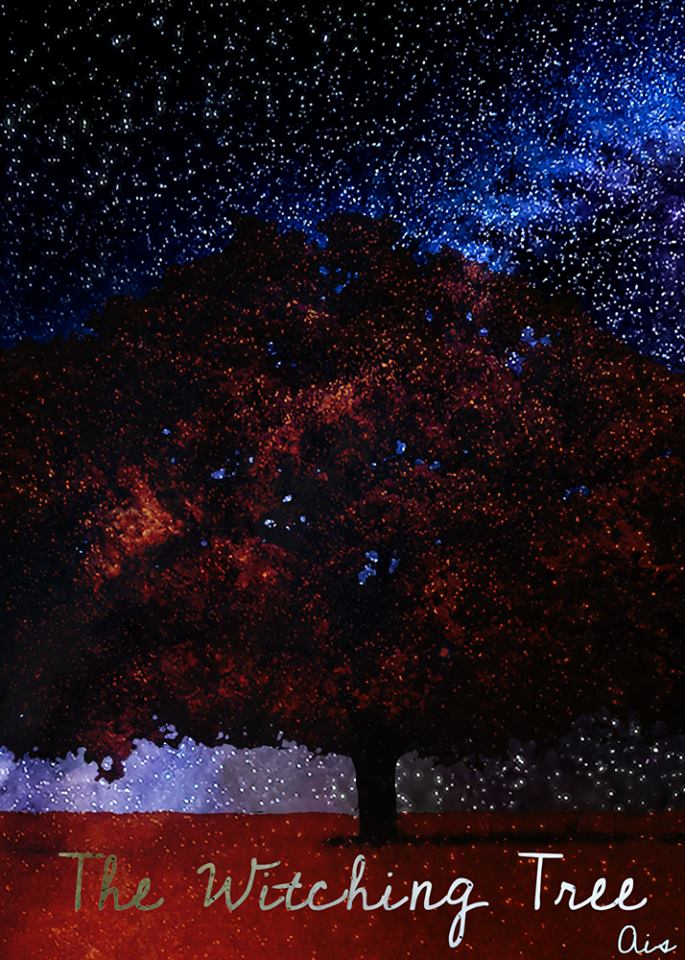 Below you will find excerpts from The Witching Tree. Note that these excerpts are not edited and are included merely to give an idea of the story.

“Twelve, maybe eleven if we book it.”

“That long? It’ll close in eight.”

“I’m telling you, we should give this one up for lost. Another lane’ll show eventually.”

“I don’t really care about all that. Mila.”

Rowan grabbed her elbow and dragged her to a stop. Glaring ahead, Mila jerked against his hold but he didn’t budge.

“You can’t know that. We don’t know where it will intersect with your world.”

“Rowan, what if we miss it and this was the time?”

“Mila.” He turned her by her arms, and when she still looked ahead he pressed his fingers to her chin and forced her to focus on him. “There will be other times. But right now the hunters are on our trail, and if we get ourselves caught at the crossing it’s done. Kacie really won’t see you ever again if that happens.”

Mila gritted her teeth, her weight wavering between her feet before she growled and yanked from his grip. “Fuck. Fucking motherfuck, I hate him, I hate him so much–” She grit her teeth. “Let’s go.”

She started running in a different direction and Rowan was quick to catch up at her side. Then again, that was probably easy with legs like his. He loped along like this was a leisurely stroll while she ran as fast as she could.

“Where are you heading?” he asked her.

“The Violet Star always leads to the Witching Tree, so we have to go a different direction. The nearest gate is three miles this way, center of that forest ahead. We should be able to make it.”

“As long as the hunters don’t come. Remember–”

“If you hear them don’t look behind you, I know. I’m the one who taught you that.”

Rowan’s lips curved. “That’s not quite how I remember it.”

“Yeah, well. Your memory’s known to be shoddy.”

Mila shot him a grin. “Everyone.”

The sky was a velvet black with veins of red racing through it. The stars pulsed and changed in that bleeding dark; different constellations, different configurations, changing between one blink and the next but never seen to move. The twin moons always loomed on opposite sides of their peripheral vision no matter which way their sight was aimed. Even the grass beneath their feet cycled as they ran; long and flowing, then short and crisp, then filled with weeds and then to flowers. Each step was unpredictable; whether they would see the same as before or if it would change unexpectedly, and with it affect the drag on their bodies.

But the forest. The forests were always there. Massive trees spanning into the sky, blocking the light ahead. Pitch black beyond their ghostly white trunks. Lights appeared and disappeared in that darkness; shuttered sparks that could be the glowing eyes of predator, prey, friend, or foe.

There had been a time when those forests had terrified Mila but now she saw them as the mixed blessing they were. The only roots in an ever-changing land, and the only place where the dangers were very real but at least they were constant and known.

But the best part of the forests was that the hunters never followed them inside. Their horses and dogs could not tread upon that soil; it was the one truth everyone knew of Middle Faerie.

Kacie sighed, bookmarked her place, and started the whole process of getting Lanie hooked up to the leash again. Unlike earlier in the day, this time when they stepped outside they were alone. The sky was beautiful; a rich black spread out across the heavens, with bright stars gathered in constellations and stories that played out like unimaginably large brushstrokes. The moon was out; heavy and huge, dominating the view with its pale yellow glow. It was so bright that she could see the crisp edges of her shadow just like during the day. Fascinated, Kacie watched the shadows moving around them as they walked, and marveled at how it was just like daylight except the range of color was severely limited. Even on a cloudy day, she could have distinguished better between the dying grass and the dead leaves, but here in this moonlit night they were all shades of the same muted grey.

Kacie heard something behind her and looked back.

Nothing, as always. A lone leaf tumbling across the path, probably.

Lanie veered to the right, bringing Kacie with her back onto the paved path. Kacie watched her dog trot around, a lighter grey to the black. Lanie’s shadow had seemed so crisp and clear on the grass, but when they stepped onto the path it seemed to blur.

Kacie looked at her own shadow and noticed the same thing. It was almost like there were two shadows overlaid atop one another; just slightly out of sync and confusing the edges. She wondered what made such a difference between the grass and path. Maybe it was just–

A scrape of a step behind her.

Kacie automatically looked back– and stopped in surprise.

A woman stood there. She was half-cast in the shadow of the nearby trees, and in the moonlight all color was bled from her. All Kacie could see was that she looked to be about Kacie’s age in her mid-twenties, and she was watching Kacie. She wore some sort of tattered… cloak?

“Oh.” Kacie blinked and absently tightened her hold on the leash. “Hi.”

The woman didn’t answer. She continued to stare at Kacie but didn’t move any closer.

“Uh…” Kacie hesitated and gestured to her dog. “Sorry, are we in your way?”

The woman shook her head.

Kacie shifted her weight. This was so incredibly weird. Logically, she thought the smartest thing to do would be to walk away right now, but for some reason she was hesitant. She couldn’t shake the feeling that maybe the woman wanted to tell her something. But as the silence stretched, the woman didn’t open her mouth, didn’t move. She just stared. Kacie would have thought she couldn’t hear her at all if she hadn’t shaken her head.

It must have been Kacie’s imagination, but it felt like the shadows blurred even more. Or maybe the trees were moving too much nearby, casting too unpredictable a stretch of black. Whatever it was, the woman seemed to come unfocused slightly. Like Kacie couldn’t quite track her the way she was supposed to be able to. Like she was a lot further away than she really was.

“Who are you?” Kacie blurted out.

The woman’s eyelashes lowered. Kacie thought she looked terribly sad when she smiled.

Lanie’s bark shot through the night. Kacie jumped and looked back to find her dog staring intently ahead of them. She had lowered herself slightly, her ears flattened and lip lifted. A low growl rumbled from her chest. Alarmed, Kacie followed the direction of her dog’s gaze and found–

Not even a stray leaf.

“Lanie!” Kacie tugged on the leash. “Stop it. You scared the hell out of me!”

Kacie turned back to apologize to the woman, and felt the words dry in her throat.

No one was there.